Texmind Braiding Machine Configurator is a powerful CAD software for creative developers of new braiding machines and braided structures.
The user can configure his machine trough selection of the size and position of the horn gears with the mouse. After placing the carriers, the user simulate the carrier motion and test the carrier arrangement. Carrier collisions are automatically detected. The idealized 3-D-image of the braid, that is to construct, is as well visualised.

Texmind Computer Controlled Braiding Machine Configurator is advanced version of the Configurator, released in January 2018. It allow the operation with computer controlled switches, which are changing the track during the braiding process. 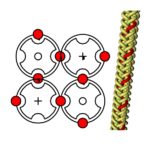 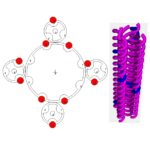 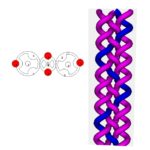 Create your braiding machine with the mouse.

Are the switches between the carriers programmable

Is there direct export for the programming of the VF Machine of Herzog or some other special machine.

Not yet. Ask the producer for file format. We have several CAD packages with direct export to machine files and there is no problem to implement new formats.

Not more. The older versions had the possibility to say “1 Full 1 Empty” and the software arrange the carriers, but this feature is not more supported, because it will not work on machines with variable tracks.

The user can set each switch state during the programming and record the complete braiding programm. Step-wise motion of the braiding machine and additing carriers after the motion allowed.

02.2016
Added Switch cams which can be set to “transfer” or “keep” positions Predefined Machines for packing machines and varioflechter

03.2015
Improved menu bar and several bugs fixed.
Test with 33 students during one week braiding course on Windows XP, Windows 7, 8, Windows 8.1 and one Windows 7 on Virtual Machine on Mac.

01.2015
Mouse Interactions included.
The user can place gears and carriers with the mouse (drag and drop)

We actively develop the TexMind Braiding Machine Configurator! Ask for demo version or updates about the features!